NOTE: The Lighting Karts shop (Nailsworth) will be closed for the next 7 days due to the Covid lockdown in SA. We are contactable via email at info@lightningkarts.com.au 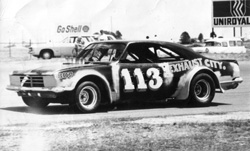 Dennis Burford races a Monaro at AIR
Lightning karts was established in 1992 but has a racing history dating much further back. Both Mark & Michael were born into racing with their father Dennis racing at the time. Dennis started racing in the 70’s originating with circle track racing at Adelaide International Raceway, Drag Racing and then moving into speedway building one of the first tube chassis super sedans in Australia.

In 1984 Dennis moved to Sprintcar racing where he competed nationally until he retired in 1988. During this period the Burford’s became involved in go-karts, initially racing bitumen for several years before they moved to dirt. Once Dennis retired from sprintcar racing Go-karts became the main focus and they went from racing 6-8 races a year up to 36 meetings a year. In 1996 Dennis Moved back to racing Sprintcars and now both Michael and Dennis race 360 Sprintcar’s as well as karts.

With the whole family racing including their mother Julia, the boys had to learn how to do all the work themselves. They first started doing their own engine work and then moved onto modifying their karts to the point they were making their own. As their success grew, other drivers started asking for work to be done on their karts, so Lightning Karts was established.

Mark using Lightning's CNC Mill
Lightning karts started on a small scale. Moving into a showroom at Prospect, Michael ran the shop during the day leaving engine work for after hours work at their workshop. As the shop grew it became time for more help. Mark started working at the shop between University lectures and before long started working full time at the shop.

After several years the engine work load became too great to just do after hours so when they moved to their current location they set up a full engine workshop. Jamie Crouch was also employed to assist with kart assembly and the running of the shop. The Decal Factory was established to supply graphic’s to their customers race cars and Redback Race Equipment expanded into importing speedway equipment along with their karting components. Since expanding their showroom, they have also worked on expanding their chassis manufacturing workshop. Recent additions have allowed them to purchase new equipment, including a recently purchased guillotine and CNC mill.

Michael works on an engine on the dyno
Each of the team takes care of certain aspects of the Business. Michael is the Engine builder and developer. With the use of the shops engine dyno, Michael is able to develop most of the engines before they even hit the track. The dyno removes a lot of the variables of track testing by eliminating track conditions, driver, kart, and weather variations. It also is also used for running in engines and problem solving. Other services such as porting, flowbench testing, rebores or engine rebuilds are also looked after by Michael.

Mark’s duties involve running the shop front as well as the chassis manufacturing. Their comprehensive workshop has allowed them to expand their kart chassis manufacturing into developing their own sprintcar chassis. The 2004 season saw the initial Lightning Sprintcar Chassis hit the track, and with the knowledge learnt from this car the second version hit the track in 2005. This car won the Victorian title, and Speedway city Nationals along with many other events along the way. Dennis is involved with the Importing side of the business, establishing new contacts and arranging equipment. Lightning Karts endeavor to keep almost all of their work in-house. They believe that this is the only way to control quality. Generally if they can’t do it today they will have the equipment tomorrow so that they can.

The Lightning Karts Race team is very passionate about their racing. This year they will participate at around 46 race meetings between Sprintcar, Bitumen Karts and Dirt Karts. The first weekend in September this year saw Michael Racing dirt karts in Perth, Mark at Willowbank for the Rotax Nationals and Dennis and Jamie racing dirt karts in South Australia. All this racing helps them develop and test any new ideas and keep up with the latest changes around Australia.

Michael’s short sprintcar career has also seen him so far win rookie of the year, win the SA points series in his second year as well as a Victorian title, 360 Sprintcar Nationals and many feature wins along the way. Dennis over his racing career has won many events. This man has been described as a fine wine, only getting better with age. 2003/04 saw him win the Speedway city Tectalloy series, the SASA Championship and the NASA SA Series.